How do Startups Use Social Media? A Data-Backed Answer

How do Startups Use Social Media? A Data-Backed Answer

What social media channels do early-stage startups prefer? What kind of content do they share on these channels? Is it even worth investing in social media for a new startup? ...

Share
Share on RedditShare on TwitterShare on LinkedInShare on FacebookShare on TumblrShare on Google PlusShare on PinterestShare on Email
What social media channels do early-stage startups prefer? What kind of content do they share on these channels? Is it even worth investing in social media for a new startup?

If you’re a startup founder, these are important questions to answer. What social media channels you use, and what you share on them will impact your long-term marketing and communication strategy.

To help you find an answer, we looked at the social media habits of 50 startups across industries. Some of what we learned was expected, some was surprising, but nearly all of it was incredibly helpful.

Read on to find out…

I. How Startups Use Social Media

To figure out our list of startups, we followed a simple process:

At the end of this exercise, this is what the data looked like:

We also had an equal distribution of B2C and B2B startups – 25 apiece.

From this list, this is what we found out:

Calculating the total number of followers/fans across social networks for all 50 startups, we found that Facebook dominates the field with a total of 432,543 fans. 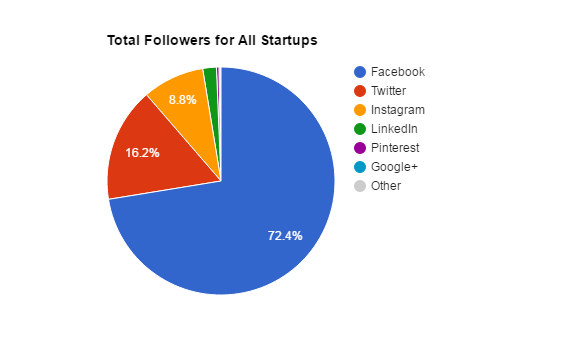 From this, we can see that:

2. Social media is for consumers

Looking at the spread of social media followers across B2B and B2C startups, something becomes very clear: social media is a B2C game.

Take a look at the followers for B2B and B2C startups across social networks: 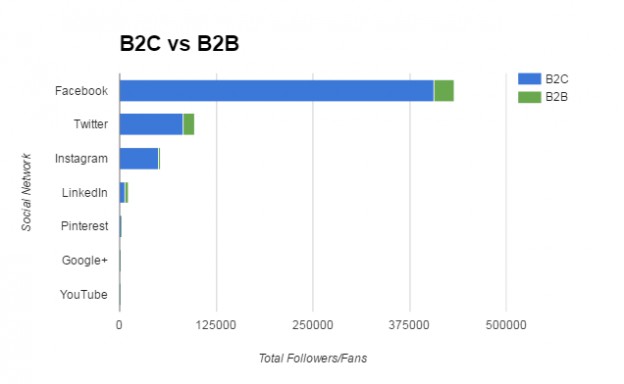 B2B startups have just 8% as many followers as B2C startups. That’s a massive difference. 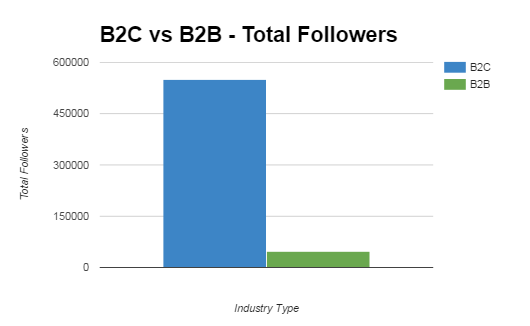 The spread of followers for B2B startups isn’t hardly uniform across social networks. Twitter and Facebook account for a bulk of the total followers, with average followers at 578 and 1,045 respectively.

Here’s a chart showing the total followers for all 25 B2B startups across all 7 social networks: 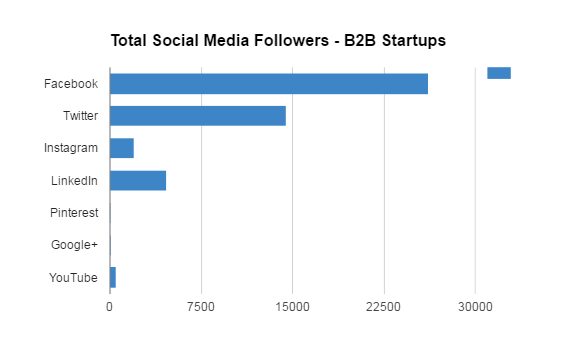 And here’s the same for B2C startups:

A couple of things stand out here:

Twitter might be great for sending out quick updates about your brand, but it’s not exactly the best way to show off a product or build out a brand.

For example, on Facebook, B2B startups have just 6% as many fans as B2C startups: 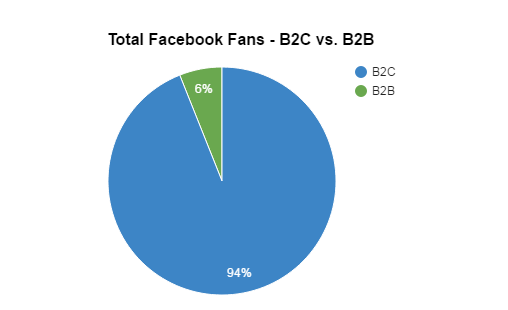 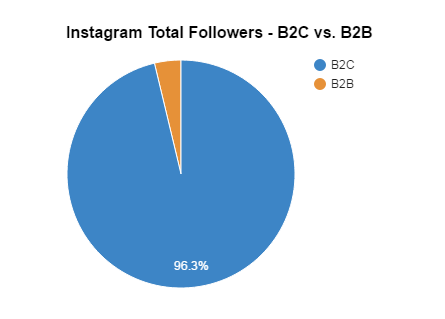 However, despite its image heavy content, Pinterest doesn’t do particularly well with early-stage startups – the average number of followers on this network is just 84.

Unless you’ve been living under a rock, you’ve probably heard of Twitter’s growth struggles over the last couple of years. 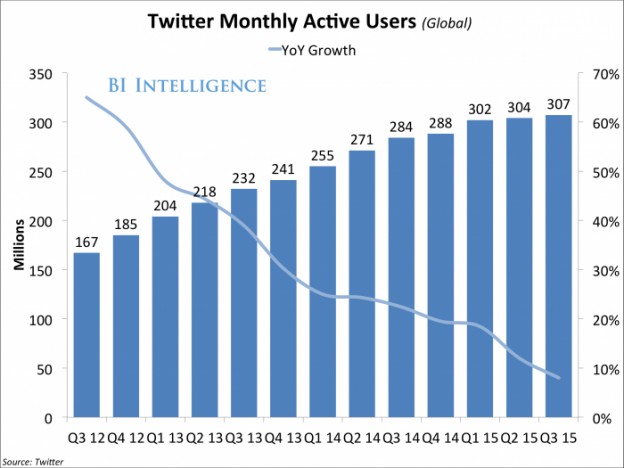 Despite growing revenues, the company hasn’t managed to add a lot of new users. As a result, it has slipped behind Instagram to #6 in the social network rankings: 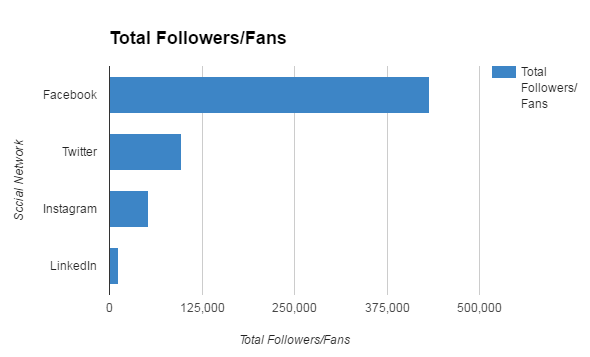 There are two reasons for this discrepancy:

In October 2014, Copyblogger announced that it would shut down its Facebook page with over 27k likes.

This was close on the heels of a bunch of other high profile businesses closing down their Facebook pages.

Their reason? Not enough interest from Copyblogger’s business-focused audience.

If we look at our numbers, it’s clear the Facebook has the largest number of total followers. Even the average number of followers on Facebook is 4x the next largest social network, Twitter – 8.6k vs 1.9k.

Looking at the median number of followers, however, tells a different story. The median for Facebook is 863 followers; for Twitter, it’s 560 followers.

The difference between average followers for these networks, on the other hand, is massive – Facebook has 8,651 followers on average vs. 1,939 for Twitter. 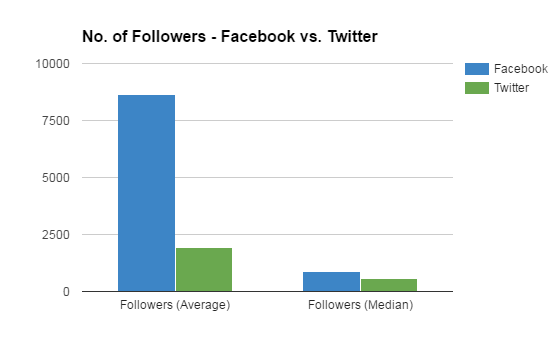 This chart should help you understand this better: 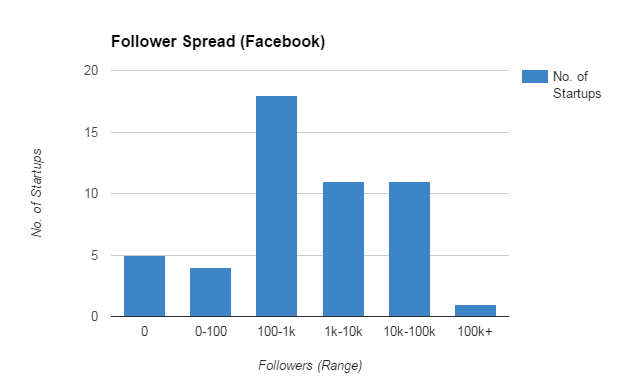 The majority of startups (29) have under 1,000 likes. 5 startups don’t even have a Facebook presence, while 4 others have under 100 likes. The numbers are skewed largely by a handful of startups with 50K+ likes (which have their own engagement problems – more on that below).

Contrast this with Twitter, where every startup has at least some presence, and the majority occupy the 100-1,000 follower range. 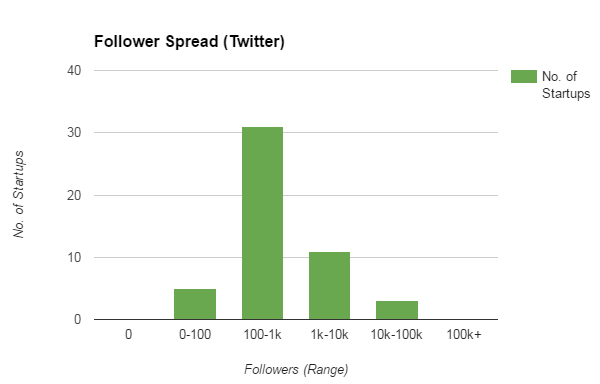 This concludes the first half of this post. Next, we’ll look at what kind of content do startups actually share on these social networks, and what you can learn from them.

Every social network has its own language, idioms and rhythms. Your followers won’t mind an occasional flurry of tweets, but they will mind a dozen pictures uploaded within minutes of each other on Instagram.

This is what we found:

Out of all the early stage startups mentioned above, Cujo has the maximum number of followers on Twitter. This home security startup has over 23k followers and has sent out 4.8k tweets to date (for a follower:tweet ratio of 4.78:1).

Instead of coming up with their own tweets they tend to retweet other articles from different sources, mostly focused around security. 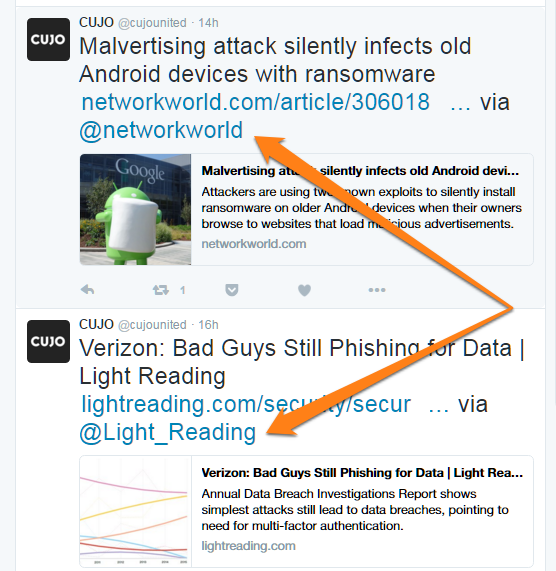 It is no surprise they keep their Twitter profile updated by posting at least 4-5 tweets a day.

Whether it’s BBC, Wired or a small security focused blog, they share it all, as long it as it aligns with what they do, “The Smart Way to Fight Home Hacking”.

As we saw earlier, Facebook is surprisingly ignored by a lot of these startups. Poor alignment with their target market is one reason. Another is the lack of engagement.

Take a look at the top performing startup (in terms of total followers) on our list – KFit. This startup helps you discover, plan and book fitness, beauty and wellness activities near you. 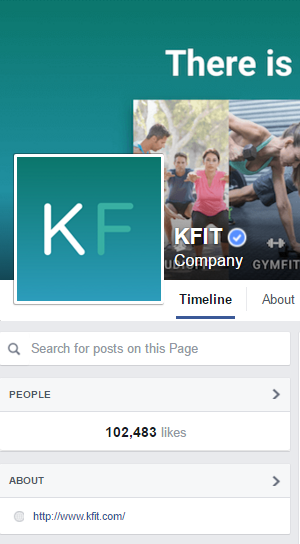 It has a large number of likes – 102k and counting.

However, going deeper, we see that KFit’s fans show little to no engagement with their their page.

The ratio of people talking about it to the number of likes is very poor: 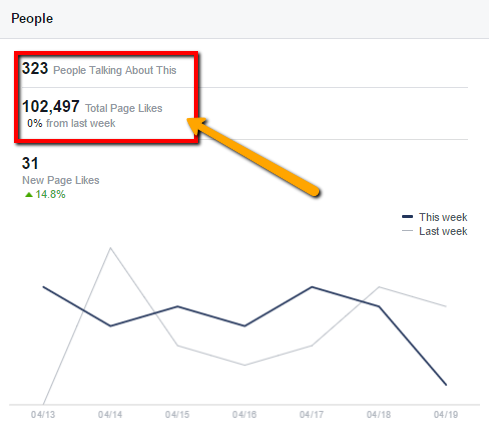 Contrast this with the engagement rate of a popular page like Buzzfeed:

Even KFit’s updates have very poor engagement, getting 1-2 likes at most. 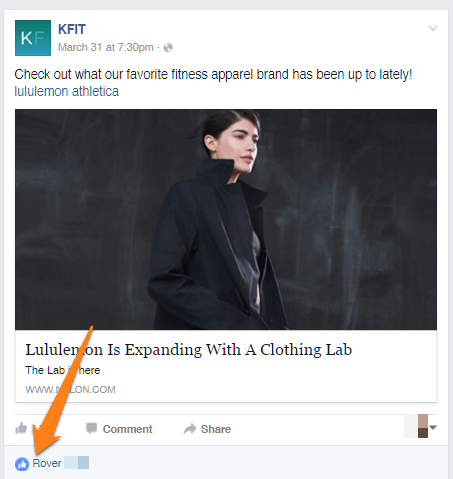 An example of a startup that is using Facebook the right way is Treebo Hotels. They share content regularly and get fairly good user engagement for each update: 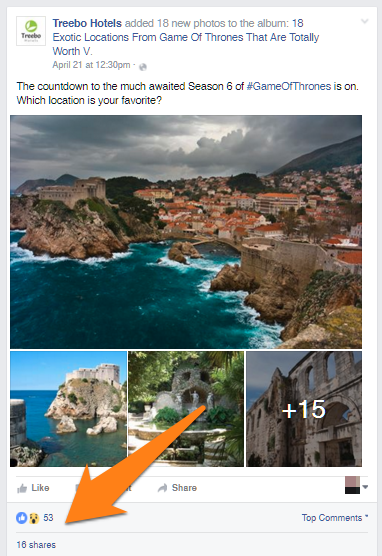 Since they are a Hotel startup, they rely heavily on user feedback. They use video testimonials of their customers and post them on Facebook. 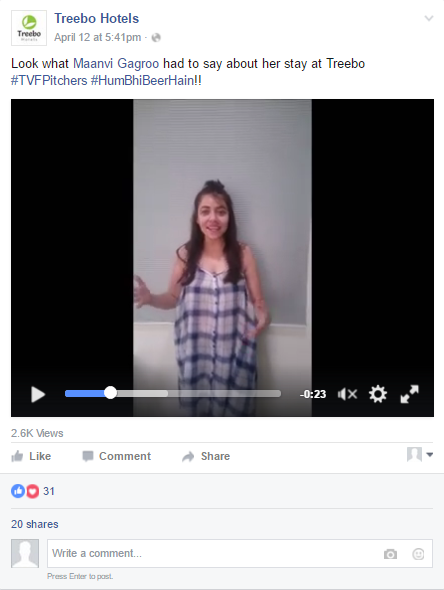 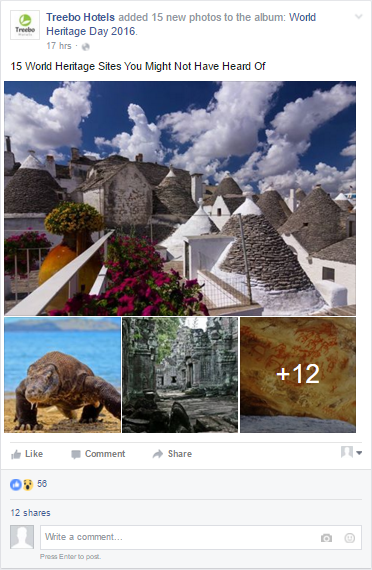 And they share company updates and promos as well: 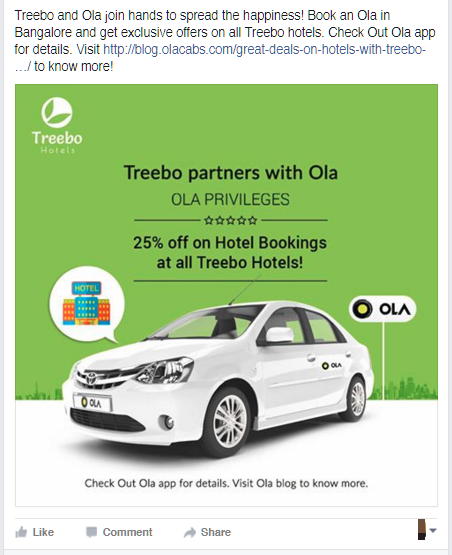 A combination of all this gives them much better engagement rates than most of their peers in our list.

Yadox’s Instagram strategy focuses on sharing high quality images that all follow the same template – a white background, the product, the price in hard-to-miss red, and the Yadox logo. 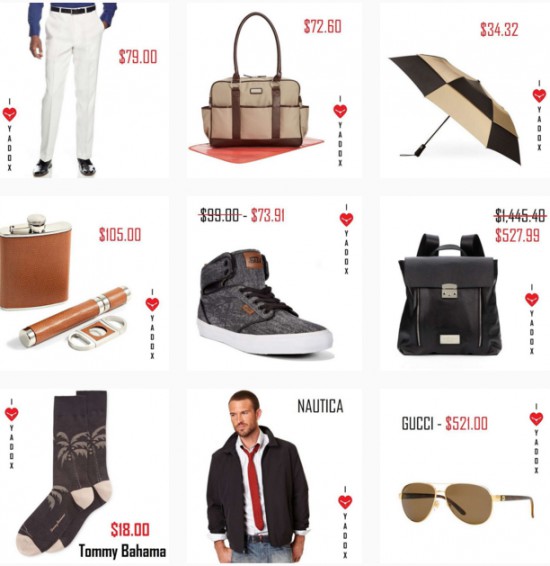 Yadox also does a pretty good job of using hashtags extensively in all its updates: 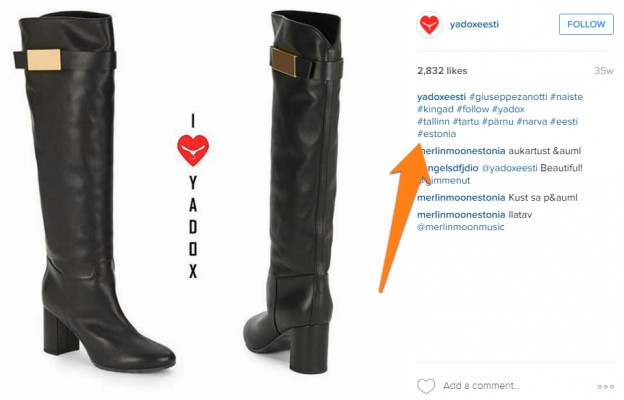 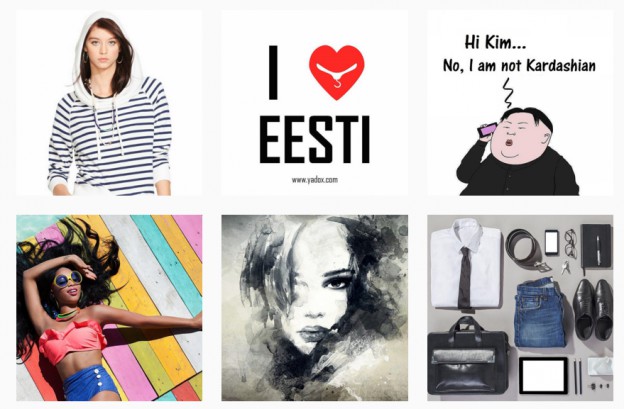 This is a good way to check the self-promotion and build out your brand.

Pinterest is largely ignored by most of the startups on our list. The top performing startup is Fliiby, a content publishing and monetization platform for artists and developers. 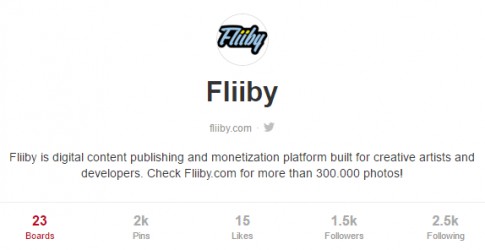 The images are repinned from Fliiby (thus driving traffic to the site) and include short descriptions. Note the use of hashtags. 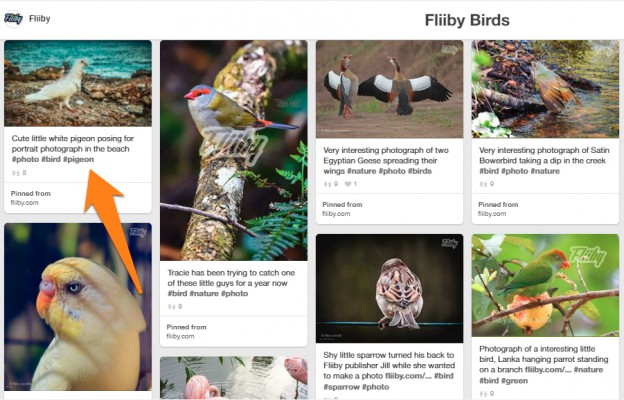 KFit has around 2k followers followed by Jumpshot.

Generally, these startups use LinkedIn as a hiring tool, not a marketing platform. Whatever content they do share tends to focus on company news. 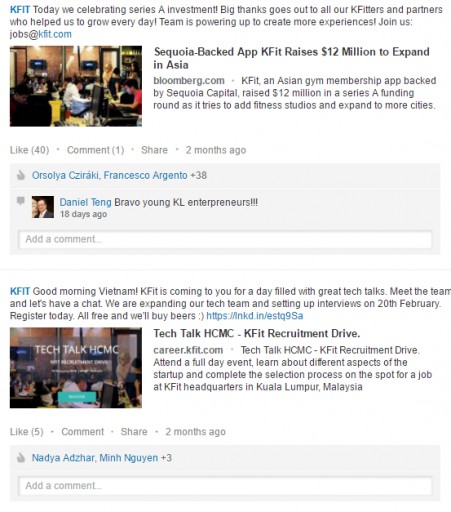 Since LinkedIn plays a big part in the recruitment process, startups also share content about their workplaces: 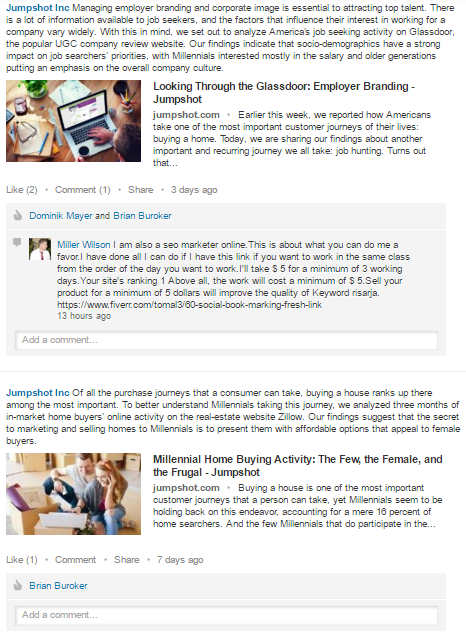 Google Plus is mostly ignored by these startups. Almost every startup has a Google+ page but almost zero updates. These pages likely exist because Google makes one for you when you sign-up for Google apps.

Fliiby has the most number of subscribers on Google+ followed by Cujo.

They share an update almost everyday, though each update has little to no engagement: 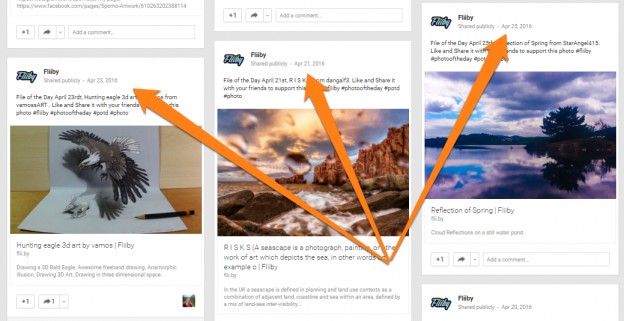 This is in sharp contrast with their Twitter profile, where they often share updates multiple times a day (and sometimes, even multiple times in an hour): 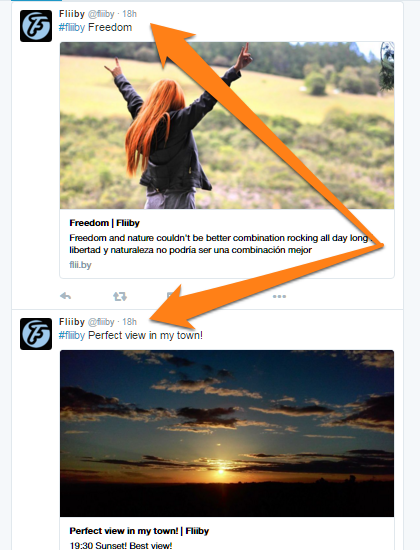 The only startup that is even remotely active on YouTube is Endurance Robots.

It makes sense for Endurance Robots to use Youtube. People would rather want to watch videos of robots than to see pictures of it.

Even though they don’t have many subscribers they do have a lot of content on the platform: 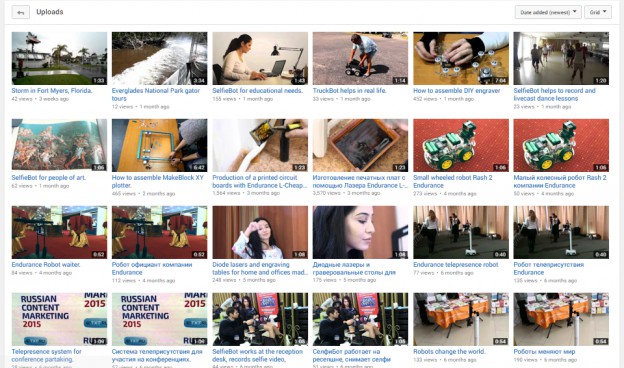